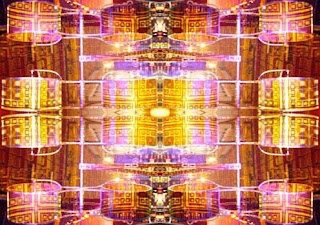 20 February 1909, Marinetti publishes his futurist manifesto in the French newspaper Le Figaro. 100 years later, as modern and contemporary history conform in all facts and points to the Futurists visions, we see emerging a new culture and a new art all over the world, the art of the Slow Future. In 2009 Slow Future celebrates the End of the Fetishism of Speed and Futurist Inheritance, with as landmark the 19th and 20th of February. 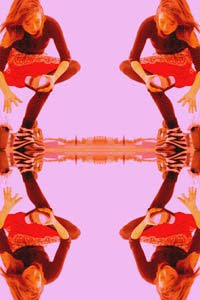 On February 19th and 20th Auxxx and Pierre Mansire presents two evenings with international artists who have a connection to the concept of Slow Future, even though they are working in many different ways. They share certain characteristics, like an eye for organic development perhaps, or the unfolding of a sound into music, the fluid outcroppings of explosive energy, the call and response within one body and its living relationship to the surrounding architecture. We present these artists and their art as the representatives of a strong current, mostly hidden underneath our culture. A current reaching out towards our Slow Future. 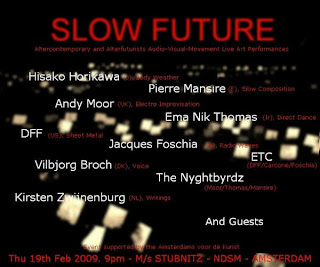 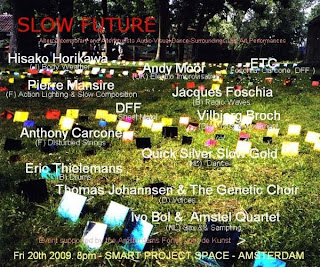 at January 30, 2009
Email ThisBlogThis!Share to TwitterShare to FacebookShare to Pinterest