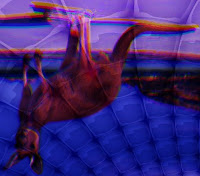 for the first AUXXX of 2012 the ODD-OZ concept of presenting an evening of artists mostly from down-under has appeared by itself again, this time in Berlin... 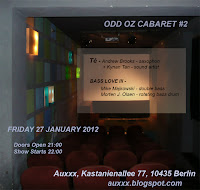 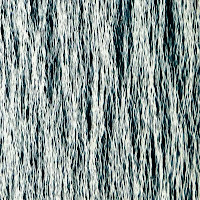 Morten and Mike first played as a duo in late 2010. Then after a break, they continued in September 2011. Since then, they have rehearsed and played two gigs as BASS LOVE III in Berlin. This performance will be their third.

ANDREW BROOKS is an Australian saxophonist-composer creating work which draws from jazz, improvised and experimental traditions. He leads several original music projects and is involved in numerous other collaborative projects. His music explores the intersection between composition and improvisation.

Andrew has lived and worked in Melbourne and Berlin, he co-leads the ensembles 'Motion' and 'Terracotta Tile Games' and performs as part of a duo with the digital artist, 'Kynan Tan'. He has toured and performed nationally, appearing at festivals such as the TURA New Music Festival (2009), Melbourne International Jazz Festival (2011), Melbourne Jazz Fringe Festival (2011) and the Wangaratta Jazz Festival (2010). Andrew has also performed or colaborated with Sabir Mateen (USA), Giorgio Magnanensi (Ita/Can), Hayden Chisholm (NZ/Ger), Peter Knight, Shoeb Ahmad and Dr. Tony Gould.

Andrew is also the co-founder of the independent record label and creative music network, ‘Listen/Hear Collective’. An artist-run initiative, ‘Listen/Hear Collective’ was created to provide a home for performers and composers whose music refuses to be defined by the expectations of a single genre and brings together open-minded, stylistically-diverse musicians, producers and technicians.

MIKE MAJKOWSKI, born 1983, is a double bassist from Sydney, Australia, now living in Berlin. He began his musical activities as a jazz bassist, and has since developed an active interest in music of an exploratory nature. He performs as a soloist, in duo with Jim Denley as 'Blip,' in trio with Chris Abrahams & James Waples as 'Roil,' and frequently collaborates with other improvisers from around the way. He holds an interest in developing technical possibilities for the double bass.

MORTEN J. OLSEN is a musician, sometimes composing - once in a blue moon involved in other arts. Born in Stavanger, Norway in 1981. He has lived 5 years in Amsterdam and is since 2006 based in Berlin. He works with a sound palette that encompasses the history of orchestral percussion, electronics and rock – a fountainhead of possibilities that he manages with pin-point critical perception and exceptional taste. He is a constant reminder that just because it sounds good, doesn’t mean its good enough.

KYNAN TAN is a sound artist who creates installation, performances and recorded works that investigate the use of digital technology in creating immersive and temporal audio-visual environments. His live performance works are based on scored and improvised instrumental parts and real-time manipulation with the computer software Max/MSP, the latest shows featuring vocals, computer generated sound and guitar processed into dense, shifting spectralist textures.

Kynan has been involved with several sound installations, including his own Hypnogenia, Floating Spires and Threads installations. Approximately 5000 people viewed and interacted with Hypnogenia while it was installed at Scitech in early 2010. Kynan is also involved in collaborating with film and dance, scoring 20 works in the past 3 years, including two collaborations with LINK Dance Company, with New Zealand Dancer/Choreographer Craig Bary in 2009 and LINK artistic director Michael Whaites in 2010.

Including visual elements into live performances has been a recent focus, manipulating synaesthetic relationships between sound and light to create juxtaposing textures.

Kynan currently lives and works in Perth, Western Australia. He co-presents the experimental radio show Difficult Listening on RTR FM, is a part of the core group of the Granular Synthesis Composers Collective and is a member of the artist run gallery free range.