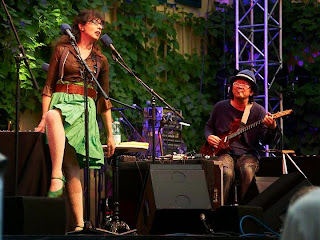 "One of the best pairing of personalities that one could imagine, Hirsch and Kazuhisa show all their magnificent talent in a flawless live recording. The American vocalist is her usual self, her interpretation ranging from one genre to another with a fantasy and an intelligence that are rare to see nowadays; her technical ability is well known, so is the sense of humour that she always puts in front of us, a trademark for which Shelley is recognizable at the first note she hits. Uchihashi Kazuhisa complements her in stunningly perfect fashion, accompanying and counterpointing through a fresh sense of technical abandon that never cancels the simple beauty of the "gesture of playing". His use of delays and effects to reach different timbral zones is a perfect balance to Shelley's crazy yet lucid evolutions. And when they try to subvert "In a sentimental mood" with their cross between anarchy and loving homage, well - I think that the circle is closed. This is a masterpiece" (review of CD: Duets. Innocent, ICR-008, 2002)

Tomomi Adachi is a performer/composer, sound poet, instrument builder and visual artist. Known for his versatile style, he has performed his own voice and electronics pieces, site-specific compositions, improvised music and contemporary music in all over the world including Tate Modern, Maerzmusik, Centre Pompidou, Poesiefestival Berlin, Merkin Hall, Tempelhof Airfield, STEIM and Walker Art Center working with Jaap Blonk, Nicolas Collins, TAKAHASHI Yuji, Annette Krebs, SAKATA Akira, Jennifer Walshe, ICHIYANAGI Toshi and OTOMO Yoshihide. He has composed for untrained vocal groups and professional contemporary music ensembles, been using even brainwave, artificial satellite and paranormal phenomenas. He directed Japanese premiere of John Cage's "Europera5" in 2007. CDs include the solo album from Tzadik, Omegapoint and naya records. He was a guest of the Artists-in-Berlin Program of the DAAD for 2012.

Meinrad Kneer operates on the borders of jazz, improvised, ethnic and contemporary music. After his school years and civil service he studied Biology at the University of Tübingen. From 1995 till 1999 he studied music and double bass in the Netherlands and ever-since he is present and active in the Dutch music scene and abroad. Next to Amsterdam, he established in 2010 a second home base in Berlin/ Germany, therefore he is present in both cities/ regions and their vivid music scenes.

Korhan Erel is a computer musician, improviser and sound designer based in Berlin. He treats the computer as an instrument that can co-exist with conventional instruments in free improvisation. He makes frequent use of field recordings or found sounds in his instrument designs. His music covers free improvisation, conceptual sound performances as well as structured and composed pieces, the latter mainly performed at art events and museums in Europe. He is a founding member of Islak Köpek, Turkey’s pioneering free improvisation group. He performs solo, duo and group concerts in Turkey and Europe. Korhan also does sound design and music for theater, video and dance. His collaboration 'The Threshold' with Sydney-based video artist Fabian Astore has won the Blake Prize in Australia in 2012. Korhan has done three residencies at STEIM in Amsterdam on sensors and instrument design. He was a guest composer at the Electronic Music Studios in Stockholm in 2011. He has many CD releases in Turkey, the Netherlands, Portugal and Greece as well as several internet releases. 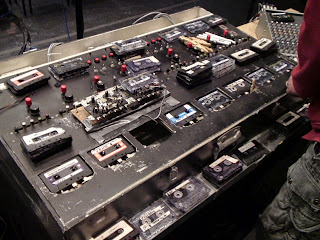 Sound Art Legend HELMUT LEMKE makes a rare visit to Berlin with his even rarer recently dusted-off self built multi cassette tape player machine. Presented in sonic conversation with his old friend and collaborator, MICHAEL VORFELD's percussion and AUXXX co-curator RICHARD SCOTT's eccentric electronicisms. What Lemke does and why he uses technology that is old, analogue and in itself extremely noisy he described in an interview he gave with W. Montgomery in The WIRE in 1998:

"Lemke feels that improvised music today still offers the possibilities both for sonic exploration and rebellion against technique. But apart from a questioning of musicanly values, he’s also unusual among contemporary experimental musicians for his lack of interest in using high technology in his own work. Feeding off the aesthetics of Captain Beefheart, Peter Broetzman and Art Brut pioneer Jean Dubuffet, he disparages the constraints of refinement."

"I like to see the human factor in the sound, as much in the presentation as in the making of music."

"It’s also about risk and the possibility of failure. People can see what I’m actually doing when I use my big tape machine set-up. In a way it’s an old fashioned sampler – I use a big box with eight tape recorders and I have 200 tapes recorded all over the world. I never know exactly where on a tape a sound is."

Transparency is an issue here, as is communication with the audience, the listener AND the viewer. It’s vital for Lemke that people can see what’s done. He isolates three factors as central to his approach: firstly using whatever sound- making materials he wishes, secondly working outside conventional spaces and third sharing his art in ways that includes and makes his art accessible. His solo recordings (released on his edition el C. label and the Nur/Nicht/Nur imprint) is extraordinarily varied, ranging from versions of English nursery rhymes to contorted guitar workouts and a projected blend of past environmental recordings. But he always brings an energetic roughness to a seemingly rarefied sphere of endeavour.

“Art to me is about communication – questioning and accepting that your processes in art are just one possible answer which lead to more questions.”
at June 20, 2014
Email ThisBlogThis!Share to TwitterShare to FacebookShare to Pinterest
Newer Post Older Post Home