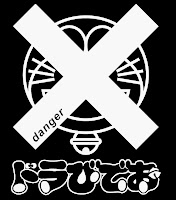 Yoshimitsu Ichiraku (drums and computer) has put together this very exciting and fun project which features a specially designed drum + computer system. Using impact sensors all over the drum kit, he creates a huge video deck - allowing him to use the drums as a live video controller. He appeared in the 2005 summer grand bazaar commercial for the department store Laforet Harajuku, won an honorary mention in the Digital Music division of Europe's largest media art festival - ARS Electronica - and has been active as the drummer in the band Yamaguchi, which has stirred up quite a storm of prizes and awards world wide. The DVD released in July of this year - 'DoraVideo Volume 1' - managed to violate every imaginable law, committing copyright infringement, slander, indecent exposure and has been awarded a spot in the Guiness Book of World Records for offensiveness, and went out of print just before release. At Auxxx he will reveal his brand new instrument Doranome.

Takuro Mizuta Lippit is a turntable musician working in the field of improvised and experimental music. His music focuses on the live reconstruction and "narrativization" of the phonographically amplified - the music, the sound, the technology and the past. He masterfully mixes scratching, cutting and stuttering with various records which reflect his influences - from free improvisation to hip-hop. Utilizing custom built samplers, he can capture and playback sounds at lighting speed or sculpt heavy drones. Don't expect the subtle!

Mark Sanders is a great drummer who has played with many renowned musicians from around the world including Peter Brotzmann, Derek Bailey, Myra Melford, Paul Rogers, Henry Grimes, Roswell Rudd, Trevor Watts, Tim Berne, Otomo Yoshihide, Luc Ex, Sidsel Endresen, Mahmoud Gania, in duo and quartets with Wadada Leo Smith and trios with Charles Gayle with Sirone and William Parker. His first musical experiences in the early 1980`s were with left-field rock groups such as The Delta 5, Gene loves Jezebel and more recently with Broadcast. Based in the UK - Mark has played with most of the country's major improvisers including Derek Bailey, Paul Rutherford, Howard Riley, Lol Coxhill, Philip Wachsmann, Keith Tippet, Larry Stabbins and Louis Moholo. With John Edwards Mark plays as rhythm section of choice for many musicians, notably in trios with Veryan Weston, Evan Parker, Alex Hawkins and Shabaka Hutchins. He is a member of Mathew Shipp's "London Quartet", Kris Wander's Unit, Alex Ward's "Predicate" and Spanish trio "Triatone" and also works in the projects of Mikolaj Trzaska, Steve Beresford, Gail Brand, Simon H Fell and Christian Marclay. In the late 1990's Mark started a twelve year stint with dub/world/rock bassist Jah Wobble in his projects - collaborating with Bill Laswell, Harold Budd, The Dubliners' Ronnie Drew and Lao musicians Molam Lao - touring internationally with this award winning 'Chinese Dub' and 'Japanese Dub' project! Mark has performed almost everywhere: in the USA, Canada and Brazil, all over Europe, in Japan, Morrocco, South Africa, Mozambique and Turkey.

Voice, mouth, sense, center, story, memory, song, noise, body. Utterances and loops of languages morphing into each other and into mutable, knotty, sound matter. The story is told but always elusive. The voice is high pitched, broken, untrained, fearless. The sense is right in the center of the phrase, so much in your face that you stop noticing it. The memory is shattered, solarized, partly erased, partly distorted. The noise is in the body. Somewhere, somebody sings. The instrument is made of wood, rubber, bee-wax. The computer is on the side. The software has been fallaciously programmed. A microphone is needed.

Alessandro Bosetti (IT) is a sound artist, composer and performer currently based in Berlin. His main focus is in the fringe area between spoken language and music. He has created a series of highly compelling sound works where relational aesthetics meets innovative composition. Field research and interviews often build the basis for his abstract compositions along with electro-acoustic and acoustic collages, relational strategies, trained and untrained instrumental practices, vocal explorations and digital manipulations. Between 2008 and 2010 he develoed mask mirror, a speaking machine based on a max/msp patch, which he will perform with at Auxxx.