"SPEAKING IN TONGUES"
with live music from

"Man's greatest tragedy is that he was first born a child".
Philosopher Poet - Friedrich Nietzsche

"Ye that hath seen me hath seen Baby Kain and no-one cometh to My father except by me. My name is Kain and I just got here".
Kain The Poet

Ausweis make surrealistic soundscapes with strangely possessed voices and sounds which emerge from trance and dream states. Their improvised music plays with tensions which seem to exist between acoustic, electronic, composed and improvised musics. Ulrike Helmholz will explore the "speaking in tongues" theme through the rhytmical recitation of texts by Hölderlin, Brecht, Kerouac, Rimbaud, Baudelaire, Genet, Dauthendey and Japanese Haiku poets. Her mantra-like looping of these words will be accompanied by colourful soundscapes created by Pit Schmidt and Ralf Meinz on saxopohone, electronic percussion and computers. Ausweis have a broad and intuitive approach to rhythmical and musical structure, every song takes the listener to a new world... These unique musicians from Tubingen have worked with many other artists including Japanese Butoh dancer Mitsutaka Ishii, German krautrockers Faust, improvisers Otomo Yoshihide, David Moss, Elliot Sharp and Franz Hautzinger, the contemporary music ensemble Zeitkratzer and American legends such as Lou Reed and Ike Willis - as alchemical artists they distil their experience from such a wide field into pure gems of strange abstraction! 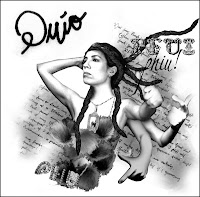 Quio is a Berlin based MC, singer and performer. She started MCing in 1997 as MC Looney Tunes. She performed with Drum' n Bass and HipHop DJs in Berlin and throughout Europe. In 1998 she met DJ G-Serve from Audiotaxi in WTF together with DJ Christine Lang. They organized parties under the title "On Bass Tracks". Quio is still part of a radio show on Berlin's former Pirate Radio Station TWEN FM, named Underground Essentials. In 1999 she met AGF when they performed on the same bill in a club. Various collaborations ensued and in 2003 they founded Quio. 2004 saw them release their first 12" on AGF Producktion and after that a full length album entitled „...like oooh!“. In September 2007 her new album "Phiu" was released. For the AUXXX alchemistic cabaret evening she will perform together as an MC with resident Auxxx DJ - Marcelle.

"Like Ooh is like a punch in the face of the creative opposition to change... an album which shoots in the aberrations of our day-to-day life, giving a sense to what we don't have ! "
CODA Magazine (France) 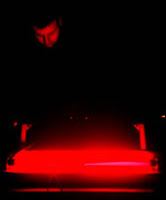