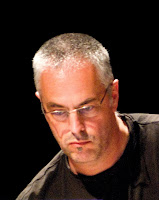 RICHARD BARRETT is equally active in electronic free improvisation and notated composition. Recent compositions have been premiered by the London Sinfonietta and the Symphonie-Orchester des Bayerischen Rundfunks, and in 2010 he has performed at the Venice Biennale, Inventionen (Berlin), Jazz em Agosto (Lisbon), Spark (Minneapolis), Muziekgebouw aan 't IJ (Amsterdam), MusikTriennale Köln and elsewhere. He is currently a guest professor at the Instituut voor Sonologie in Den Haag, where he leads a workshop in electroacoustic improvisation. Current work in progress includes CONSTRUCTION, a two-hour composition for voices, twenty instruments and electronics, which is the latest result of his twenty-year collaboration with the Elision Ensemble and whose premiere is planned for November 2011. He and Paul Obermayer have been working together as the electronic duo FURT since 1986 and formed the electroacoustic octet fORCH in 2005. He also performs regularly with vocalist Ute Wassermann, in the Evan Parker Electroacoustic Ensemble and in many other contexts, and has recorded for NMC, Matchless, Unsounds, ECM, Creative Sources, Psi and others. 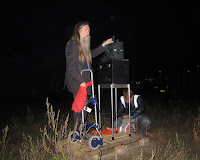 Jaap Pieters (Enschede, 1955) grew up in Almelo and is known as „The Eye of Amsterdam“. He taught Yoga in cities across the Netherlands and worked in various organic food stores. Since 1977 Jaap Pieters has been living in Amsterdam and he has been engaged in photography and film since the 1980s. All of his films are shot on Super8 – at first because it was easy and later on because the aesthetics became important to him. For a few years now Pieters has been setting up exhibitions in the field of installations where film and photography share equal parts. In his films Jaap Pieters is interested in the boundary between film and photography. To bring photographs to life so that the viewer will experience the field of tension between moving and still images and the extent to which the two are connected. His films are made with a minimal use of equipment and minimal manipulation. Pieters' film programmes include portraits of homeless people, who have deeply touched the filmmaker with their individualism, and also his so-called “abstract” films, in which he has mostly shot simple movements detached from a context exploring meaning and function.