Mono-Poly aka Dennis Verschoor from aka the Noodle Chef from Rotterdam, Holland is a modular synthesizer freak. He uses something that he likes to call patch noodles, some sort of self-generating algorithms evolving with minimal and sometimes no human interaction. He faces the audience with strange sounds and recreates unexisting worlds in between technology and emotion.

Navs usually has an idea of where he's going, even if he doesn't always know how he's going to get there. Recent live performances have been at Rough Trade East in London and the Radialsystem in Berlin. 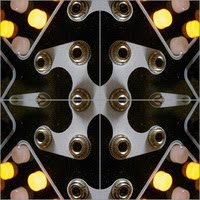