AUXXX celebrates a successful year of concerts in Amsterdam and Berlin with a special two-night event at KuLe Theater in Berlin Mitte, featuring two solo performances, a duo and a quintet. This event also celebrates new CD releases from two of the acts: Frozen Arc and Hayden Chisholm. 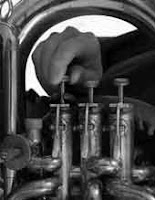 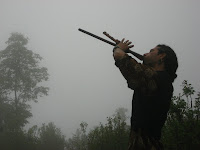 This work is about the marriage of two universal creative principles expressed
through sound: the harmonic series, and the growth series more commonly known as the
Fibonacci series. Their point of intersection is a fascinating one, both
mathematically and musically. The harmonic series is perhaps more familiar to
lovers of music but the way in which the Fibonacci series interacts with the
overtones reveals much more to the listener regarding the nature of self-similarity,
organic growth, inter-dimensional relationship and micro-macrocosm similarity. The
Fibonacci series gradually approaches the irrational number phi (1.618…), more
commonly known as the Golden Section. Some musicians have attempted to use the
Golden Section by dividing their works accordingly along the time axis; in this work
this proportion is approached on the vertical harmonic axis, which occurs in
realtime.

"If you want to understand the Universe, think in terms of energy, frequency and vibration." Nikola Tesla 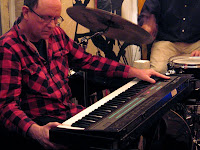 CHRIS ABRAHAMS was born in Oamaru, New Zealand but grew up in Sydney, Australia. He became very active in the Sydney jazz scene in the early eighties playing with modern jazz groups including Mark Simmonds’ Freeboppers and The Keys Music Orchestra. With Lloyd Swanton he formed the 60’s modern jazz-influenced The Benders in 1982. The band broke up in 1985 after having released three albums - E, False Laughter and Distance. In 1984 Chris recorded and released his first solo piano album Piano, followed in 1986 by Walk. In 1985 Chris became a founding member of the Sydney indie rock band The Sparklers. As a result of this, Chris began working regularly with the singer and songwriter Melanie Oxley. Chris collaborated with Melanie, writing songs and producing 5 albums, throughout the nineties. In 1987 he became a founding member and pianist of the meanwhile highly acclaimed Australian minimal jazz/rock trio The Necks. Chris released a third solo piano album Glow in 2001. This was followed in 2003 by Streaming, Thrown in 2004, and Play Scar in 2010. He has collaborated, in both recording and performance, with many contemporary improvising musicians including Burkhard Beins, Mike Cooper and Anthony Pateras. He performs regularly in the improvising music scenes both in Australia and Europe.

BURKHARD BEINS was born in Lower Saxony, Germany but lives in Berlin since 1995. As a composer/performer, working in the non-academic fields of experimental music, he is known for his widely abstracted use of percussion instruments in combination with selected objects and materials. Since the late 1980's he performs at internationally renowned venues and festivals throughout Europe, North America, Australia/NZ and Asia. Burkhard works solo, but is also a member of groups like Perlonex, Activity Center, Polwechsel, SLW, Trio Sowari, Phosphor, BBB, or The Sealed Knot. Furthermore he collaborates with Keith Rowe, Sven-Åke Johansson, Andrea Neumann, Chris Abrahams, John Tilbury, Charlemagne Palestine, and many others. Meanwhile Burkhard has released more than 30 CDs and LPs on labels like Zarek, Erstwhile, Hat Hut, Potlatch, Absinth or Confront. His first Solo-CD Disco Prova has been released in 2007 and combines field recordings and percussion material with digital multitracking, followed in 2009 by Structural Drift, a result of a sound art residency at Künstlerhäuser Worpswede, based on e-bowed and propelled zither, analog synth, objects and small electronic devices.

HAYDEN CHISHOLM is a New Zealand saxophonist/composer/teacher who has been at the forefront of European music scene for over a decade with his groundbreaking microtonal work and unmistakable sound. Currently published by Freibank, he lives and works in Cologne and Penedès, Spain. 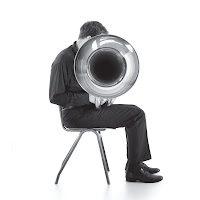 ROBIN HAYWARD was born in Brighton, England in 1969, has been based in Berlin since 1998. He has redefined the tuba’s potential both in the areas of noise and microtonality, and his compositions for other instruments reflect a similar experimental, medium-specific approach. Pieces have been written for him by such composers as Alvin Lucier and Christian Wolff. He has toured extensively both solo and in collaboration. His approach to the tuba has been documented in the solo CDs Valve Division and States of Rushing, along with various collaborative releases. Active in many contemporary music ensembles including Phosphor and Kammerensemble Neue Musik Berlin, in 2005 he founded Zinc & Copper Works for continued research into brass instruments. 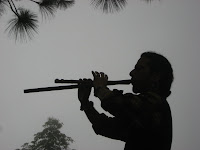 STEEV KINDWALD transmits musics based on the spirits of nature. He has passed many years living with nomadic tribals and gypsies in the deserts and mountains in various parts of South and Southeast Asia. Steev is a highly accomplished double flute Alghoza player - he not only works with the ancient traditions but also composes some of the only new music for Alghoza double flutes. Since childhood, he has played numerous kinds of Guimbarde and, for years, has worked closely with traditional Guimbarde makers in many parts of South and Southeast Asia. Steev makes many models of Guimbarde from ancient designs as well new creations. Lately he works with flute obliques from Sumatra and the Indus Valley utilizing the techniques of Multiphonic and Respiration Circular plus other surprising innovative techniques.

THANKS to everyone who has supported AUXXX this year - especially Leopold and Richard at K77, Sascha at KuLe, Ivo, Colin and John at OT301