Over 100 feet in length, LONG/GONE is a single intricately-cut piece of paper created by artist Erik Ruin, who has been lauded by the New York Times for his “spell-binding cut-paper animations.” The piece flows freely from image to image, while narratives and scenarios (often drawn from classic works of literature from Homer to Dante) emerge, collapse, and spill over and into each other. Philly Voice calls it “stark, intricate and wondrous – Ruin’s paper-cut art combines the enthralling fantasy of a storybook with the prismatic, fragmented beauty of a stained-glass window.” In performance, Ruin scrolls the paper-cut continually across the surface of an overhead projector, creating an epic and immersive shadow-show.

with LIVE MUSIC from: 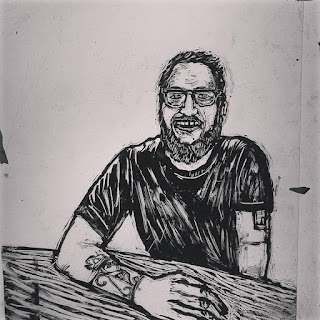 Erik Ruin is a Michigan-raised, Philadelphia-based printmaker, shadow puppeteer, paper-cut artist, etc. His work oscillates between the poles of apocalyptic anxieties and utopian yearnings, with an emphasis on empathy, transcendence and obsessive detail. He frequently works collaboratively with musicians, theater performers, other artists, and activist campaigns. He is a founding member of the international Justseeds Artists' Cooperative, and co-author of the book Paths Toward Utopia: Graphic Explorations of Everyday Anarchism (w/ Cindy Milstein, PM Press, 2012). 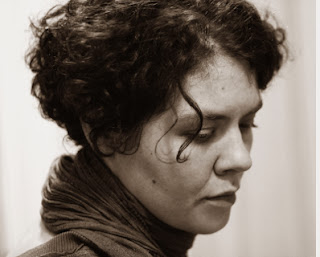 Elena Kakaliagou is a Greek-Austrian french horn player and performer, currently based in Berlin. Starting out with piano lessons, she moved on to the French horn at the age of 18. After completing her studies in Athens with Vangelis Skouras, she moved on to KUG-Graz to continue her education under the teaching of Hector McDonald. Instructed by Erja Joukamo-Ampuja, Elena obtained her Master’s degree from Sibelius Academy, Helsinki in 2010 in French horn and chamber music. During her career, Elena has received scholarships from Klangforum, Impuls and Ensemble Modern with teachers like Mike Svoboda and Bill Formann. Elena’s field of specialization is free improvised and contemporary music, next to classic chamber music. She has performed premiers and classical repertoire both as a soloist and as a member of Ensembles such as Ensemble Linea, Unitedberlin, KNM Berlin, zinc & Copper and zeitkratzer at Festivals such as Ultraschall Berlin, Maerz Music, Randspiele, Musica Nova (Finland), Musica (France), Warsaw Autumn, New Adits and Klanspuren (Austria). She has also worked with individual artists: Riikka Innanen, Samuel Stoll, James Andean, Ingrid Schmoliner, Katharina Klement, Catherine Christer Hennix, Robin Hayward, Simon Steen-Andersen, Thomas Noll, to name but a few. Elena is the co-founder of the Helsinki-based Rank Ensemble, the Austrian trio PARA, the performance groups Lúiss and Continuous Variation, as well as the classical wind quintet Aeolides. 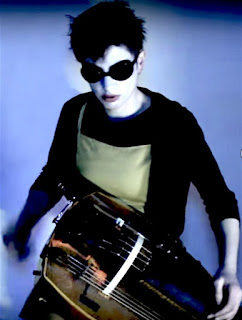 Caroline Cecilia Tallone lives in Berlin where she works as a musician and luthier. She has played all over Europe with several Italian ensembles, orchestras and singer-songwriters. With a background of classical, antique and folk music, she´s now into experimental, electroacoustic and improvised music. She is a graduate of the Professional Institute of Violin Making in Cremona in 2000 and in 2001 she obtained a post-graduate at the Centro di Formazione Professionale of Cremona. Consequently, qualifications post-diploma in violin maker and in 2006 she graduated from the Civica Scuola of Violin Making in Milan after attending specialization courses in 'Construction of stringed instruments' and in 2008 'Restoration of stringed instruments'. During the same year she attended the course of 'Construction of baroque instruments' at the International Institute of Violin Making, the Centre "CR Forma" company Professional Training of Cremona, the Chamber of Commerce and the University of Pavia achieving the diploma of Superior Technical Baroque Violin Making. In 2013 she attended the course in restoration at the Academy Perosi of Biella. Atelier Tallone is located in Berlin since 2015.