AUXXX and Brotfabrik Kino begin a new season of their Cinesthesia Screen Concert series with a special 35mm screening of Conrad Rooks' cult film "Chappaqua" from 1966, accompanied with a new live soundtrack performed by GAMUT INC. 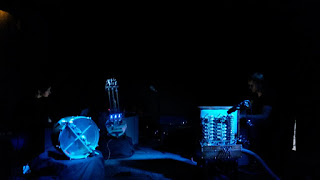 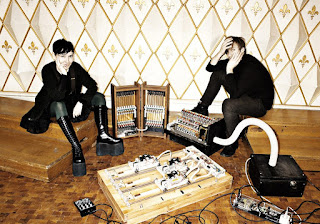 The retro-futuristic ensemble gamut inc makes musical theatre and plays computer-controlled music machines that they develop themselves. The core of the ensemble is made up of computer-musician Marion Wörle and composer Maciej Śledziecki, who collaborate on a project by project basis with various other musicians and artists.

Their last musical theatre piece THIS IS NOT A SWAN SONG, for choir, electro-acoustic ensemble and performers, tackled the ‘end’ in a complex and multifaceted way. GHOST TAPE XI broached the issue of the misuse of music in the military context; ONE MORE PIONEER in turn dealt with the mechanisation of society. In gamut inc’s current production, REDRUM, they are adapting August Strindberg’s “The Red Room” for electro-acoustic ensemble, the cello quartet The Octopus and performers, in collaboration with the US American librettist Leslie Dunton-Downer. Meanwhile, in the long-duration musical theatre piece INTERZONE, they are working with the contemporary brass trio Zinc & Copper on long, intensive drones.

The ensemble is made up of a growing number of self-playing, acoustic music machines that are controlled live by computer and are developed especially for and by gamut inc. These Jules Verne-like apparatuses translate antique acoustic considerations into a tonal language of now. Out of a collaboration with the Logos Foundation in Gent, the largest robot orchestra in the world, gamut inc created the piece “Planet 9” for its computer-controlled brass instruments. Within the framework of their concert series AGGREGATE, which is dedicated to the interaction between human and machine, they are currently developing a programme for computer-controlled church organ.

Wörle and Śledziecki organise the WIR SIND DIE ROBOTER festival, which is dedicated to machine and robot music, and the international festival AVANT AVANTGARDE, a journey through time to musical experiments before the 20th century. They have received composition commissions and invitations from international festivals (e.g. CTM, Acht Brücken, Musica Jauna Vilnius, NuMusicFestival, AudioArt Festival, NewMusic Festival Gdansk, Technosphärenklänge). They regularly compose for film and radio, are co-founders of the “Zentrum für Aktuelle Musik” and have run the satelita record label, which is dedicated to contemporary music formats, since 2009.